Retailer pays A$61,200 penalty for advertising imported products as Australian-grown 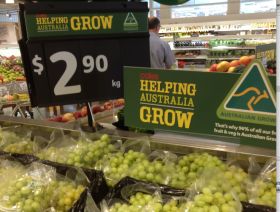 The Australian Competition and Consumer Commission (ACCC) has fined local retailer Coles A$61,200 (US$56,555) for selling imported products as Australian-grown, The Age reports.

Imported produce from the US and France, including fruits, asparagus and almonds, were advertised with price boards bearing the slogan “Helping Australia Grow”, which included the triangular Australian Grown logo.

The misrepresentations were found to have occurred between March and May this year in five stores; two in the Australian Capital Territory and one in New South Wales, Queensland and Western Australia.

“While this does not appear to be a case of widespread or systemic conduct, 'Helping Australia Grow' is a significant national campaign driven hard by Coles to advertise its fresh produce,” ACCC chairman Rod Sims told The Age.

"Consumers should be able to rely on the accuracy of claims about food, particularly when they are prepared to pay a premium for products made in Australia.”

While Coles had also used product stickers that accurately labelled their country of origin, the ACCC ruled that the their small size compared to the signage still constituted misleading consumers.

The investigation was called after a customer complaint about one such sign they noticed hanging above imported citrus and kiwifruit.

Coles maintains that the mislabelling occurred due to staff neglecting to update price boards’ promotional images as stock was relocated, rather than a deliberate attempt to mislead.

However, the retailer has paid the ACCC fines "as a matter of practical expediency to avoid a lengthy and costly legal action in defending our position”, The Age reported a spokesperson as saying.

Coles has reaffirmed its commitment to supporting Australian farmers and claims it fulfils its advertising claim of stocking 96 per cent Australian fresh produce.