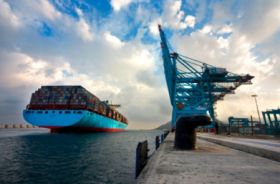 Danish logistics giant AP Møller Mærsk has reported on a strong opening quarter of 2014, with year-on-year growth in both revenue and net profit.

For the three-month period, Maersk saw overall group profit hit US$1.207bn, up from US$790m in the same period of 2013, while net profit attributable to shareholders soared 62 per cent to US$1.15bn.

“The Group delivered a satisfactory result for the first quarter," said CEO Nils Andersen. "Net profit improved by 51 per cent, driven by all five business units except for Maersk Drilling, which delivered as expected in a quarter with two yard stays and intake of two new rigs.

"APM Terminals increased volumes and Maersk Line was positively influenced by high utilisation and continued cost reductions. Also Services & Other Shipping delivered in line with expectations and overall, we can be satisfied with the progress made in Q1 towards our strategic ambitions."

The group's container shipping division, Maersk Line, made a profit of US$454m – up from US$204m last year – despite 5.1 per cent lower freight rates and aided by 9 per cent lower unit costs. Volumes increased 7.3 per cent to 2.2m FFE.

In its outlook report, the company said that it still expected a result for 2014 'significantly above' the 2013 result of US$3.8bn, predominantly impacted by the US$2.8bn gain from the sale of Dansk Supermarked Group.

The underlying result is now expected to be around US$4bn when excluding discontinued operations, impairment losses and divestment gains.