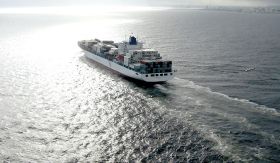 The new containers were loaded aboard Mv Yuehe in Melbourne and arrived in Shanghai late last month.

To meet Chinese Commodity Inspection standards, the temperature of each container was measured and reported at specified times during the voyage.

Coscon described the voyage as a milestone for its company and intends to expand its Cool Treatment service to more trade lanes in the future to satisfy increasing demands from fresh fruit and vegetable importers.