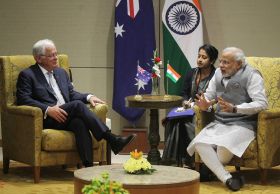 The Australian horticultural industry is optimistic a free trade agreement (FTA) with India will have major benefits to the industry, with expectations that the agreement with be signed in 2015.

“As Prime Minister Modi said during his visit [to Australia] in November, India sees Australia as a major partner in every area of its national priorities. We are here to show that the Australian Government and Australian businesses and institutions are ready and willing to work with India to help its transformation into one of the world’s great economic powers,” said Robb in a press release. “This is a substantial trading relationship but clearly there is scope for significant growth, not only in the more traditional areas of trade such as resources, energy and agriculture, but also across a broad range of services as well as investment.”

Robb met with Indian prime minister Narendra Modi to discuss investment and trade on 9 January, telling the Australian Broadcast Corporation (ABC) that both governments were pushing for the FTA to be finalised this year, citing “bureaucratic hindrance” for trade with India lagging behind Australia’s A$160bn bilateral trade with China.

Tania Chapman, chair of Australian industry group Voice of Horticulture, has said that trade with India has the potential to grow on a similar level to that of trade with China.

David Minnis, chairman of the Australia Horticultural Exporters’ Association, has agreed, saying that Australian produce can take a much more prominent share of the market in India.

"One of the problems for us in India is that we're probably the most expensive supplier, because of our high labour costs and transport costs, so we certainly would welcome a free trade agreement that would lower duties and allow us to become more competitive," Minnis explained.