BBC Technologies puts it all on show 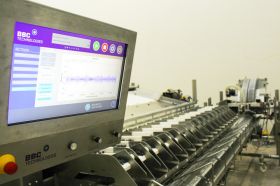 The Global Berry Congress will provide the company with another opportunity to highlight its latest innovation, the CURO-16 Filling System, which attracted strong interest at the recent Fruit Logistica trade show in Berlin.

BBC Technologies’ European sales manager Fred Douven said the CURO-16 was capable of consistently packing up to 240 clamshells per minute, with customers enthusiastic about its ability to achieve increased throughput with no increase in environmental footprint.

“This captures the essence of what BBC Technologies offers—innovation from our consistent and longstanding investment in R&D that gives customers an edge in an increasingly competitive marketplace,” Douven explained.

Increasing its share in the European market will be a priority for BBC Technologies at Global Berry Congress. Douven said the company is on a growth curve in the EU region, thanks largely to its expanding sales office, based in Horst, in the Netherlands. BBC Technologies is also responding to strong demand in other parts of the world, including the Americas and Asia, with a new office to open in China in 2015.