Aided by performance of Maersk Line, the logistics group reports a full-year 2014 profit of US$5.2bn 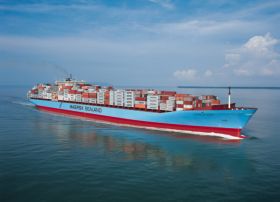 Logistics giant AP Møller-Mærsk has revealed a strong financial performance in 2014, with a profit for the year of just under US$5.2bn, up from the US$3.78bn recorded in 2013.

Overall group revenue climbed from €47.39bn the previous year to €47.57bn, the company reported, with underlying profit up 33 per cent annually to US$4.5bn.

"2014 was a very good year for Maersk Group," said a joint statement from Michael Pram Rasmussen, chairman of the
board of directors of A.P. Møller-Mærsk, and Maersk Group CEO Nils Andersen. "We delivered a strong financial performance with a profit of US$5.2bn.

"We made good progress on our strategy to develop the Group into a premium conglomerate, with five of our eight businesses world-class performers in their industries," they continued. "We increased the focus of the Group by divesting certain assets. Over the year US$2.5bn was received from divestment of APM Terminals Virginia, Maersk Drilling activities in Venezuela and Maersk Tankers VLCCs (Very Large Crude Carriers). In addition, the Group received US$2.8bn from divestment of Dansk Supermarked Group."

The result was boosted by Maersk Line, which maintained its lead on the rest of the industry and delivered a higher than expected profit of US$2.3bn - up from US$1.5bn - due to stronger than expected volumes as well as lower unit costs from continued optimisation and lower bunker prices, partly countered by lower freight rates.

Maersk Line's underlying profit was also higher than expected and came at US$2.2bn, again up from US$1.5bn.

"Maersk Line increased its result by 55 per cent with a profit of US$2.3bn, maintaining its leading position in the industry," Rasmussen and Andersen added. "This was achieved against a backdrop of continuing overcapacity in the market and declining freight rates. We expect this to be an ongoing trend, as shipping companies continue to place large orders for new vessels, despite the fact that the industry is struggling with low returns."

APM Terminals, meanwhile, delivered a profit of US$900m, positively impacted by volume and margin growth as well as divestment gains, mainly relating to the port in Virginia in the US.

In its 2015 guidance report, the group said that it expects an underlying result slightly below US$4bn, excluding Danske Bank.