Celebrity-endorsed FNV hits the US 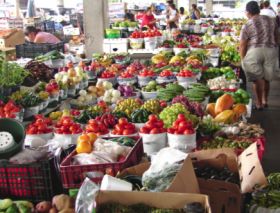 Jessica Alba and beetroots, athletes and carrots, Michelle Obama and Mexican avocados – they might not seem related, but these are just a snippet of the supporters and products being promoted by the new fresh produce marketing campaign targeting teenagers and mothers in the US.

The brand, a collaboration between Partnership with a Healthier America (PHA) and advertising agency Victors & Spoils, was launched at the PHA 2015 ‘Building a Healthier Future Summit’, with US president Obama’s first lady Michelle Obama voicing her support for the campaign.

“[The FNV] campaign is going to be amazing. It’s exciting. It’s fresh. It’s clever … if folks are going to pour money into marketing unhealthy foods, then let’s fight back with ads for healthy foods, right?” Obama said in at the summit.

“FNV was inspired by big consumer brands, whose tactics are compelling, catchy and drive an emotional connection with their products,” said PHA CEO Lawrence  Soler. “We want to do the same thing for fruits and veggies, which haven’t had an opportunity to act like a big brand. Until now.”

The brand will be trialed in Fresno, California, and Hampton Roads, Virginia, using what Victors & Spoils’ Andy Nathan has described as “in-your-face marketing tactics that go toe-to-toe with other big iconic brands”.

“The message of health just isn’t cutting it with families. They know fresh produce is healthy – they need a reason to listen and care,” said VP of marketing for Sunkist Growers, and PMA chairman, Kevin Fiori. “This kind of marketing effort is something that the PMA Board of Directors believes will resonate on a more radical level and ultimately make fresh produce more attractive.”

The brand has already signed up celebrities and sports figures including Jessica Alba, Kristen Bell and Cam Newtown, with support from fresh produce companies Avocados from Mexico and Bolthouse Farms, among others.