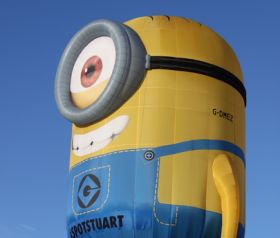 Australia’s banana industry is pinning its marketing hopes on a set of Minnons ahead of one of the most challenging domestic seasons on record, according to the Courier Mail.

The popular children’s cartoon characters from Universal Studios’ Despicable Me franchise will star in a short video titled Banana, which centres around their love for the fruit. It also includes includes the Ba-ba-ba-ba-ba-nana song made popular during a series of Australian television commercials during the 1990s.

“Minions are hugely popular little creatures,” HIA’s general manager of marketing David Chenu told the Courier Mail. “They live off and their favourite food is bananas. In Australia, too, the banana is the nation’s most popular food. Five million bananas are eaten every single day in this country. There is a strong emotional connection to bananas.”

Australian banana producers have been on high alert over the last month, after the discovery of the Panama Tropical Race 4 (TR4) at a farm in Tully, Northern Queensland. While the Queensland Government and industry groups are working frantically to contain the spread of the disease, experts have warned that the sector may have already changed forever. The disease wiped-out banana production in the Northern Territory 20 years ago.

Meanwhile, Tropical Cyclone Olwyn, which battered Western Australia’s central coastline earlier this month, has had a significant impact on the state’s sales programmes. Over 30 growers, who supply the West Australian market exclusively, have lost all production heading into their season.