California is on track to ship 113.3m cartons of table grapes this season, with plenty of international demand 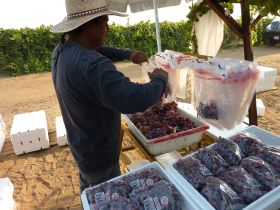 Californians harbour great hope that the four-year drought that has been plaguing the state will be alleviated this winter by the weather phenomenon known as El Niño now building in the eastern Pacific Ocean. All the signs are there: warm ocean temperatures off the California coast; fish rarely seen outside of the tropics showing up in commercial fishing nets; and summer rains with high humidity.

The rain was welcome in many parts of the state but not necessarily in the San Joaquin Valley, with the table grape harvest entering its peak.

Bassett, who inspects table grape quality for both domestic and international clients, says that many young vines with little or no leaf canopy for protection were hit the hardest, suffering split berries as well as disease.

“There was a lot of rot to be cleaned out of the bunches. The Scarlett Royal, which tends to have very tight bunches, had a lot of quality issues. Those [growers] who didn’t do their early [berry] thinning ended up with botrytis.”

Reports are that some of the early Red Globes were also hit hard by the untimely rains. Crimson Seedless, which were also starting to be picked at the time, seem to have come through relatively unscathed, however, and lLater-season varieties, such as Autumn Royal and Autumn King, both appear to have been unaffected by the weather.

According to figures published by the CTGC, the industry shipped approximately 44.5m cartons valued at US$857.6m during last year. Those figures are down from 48.5m cartons and US$920.9m value of the 2013 season, when a record 116m cartons were shipped.

The largest offshore market outside of North America for California grapes is the South East Asia Region (Indonesia, Malaysia, Singapore, Thailand, Vietnam), which imported nearly 6.4m cartons, followed by China-Hong Kong at 2.9m cartons. Other significant destinations in Asia include the Philippines, Taiwan, South Korea, Japan, the UAE and India. South Korea made the most impressive gains: imports soared by 41 per cent from 950,000 cartons in 2013 to more than 1.342m cartons last season.

The CTGC plans to promote California table grapes throughout the remainder of the calendar year, lasting until the Lunar New Year holidays if supplies permit.

According to vice president for international marketing Susan Day, promotions will target key retailers in various regions, tying California table grapes to major holidays such as the Chinese Moon Festival and Diwali in India.

“We will be working with major food retailers in both regions, placing displays of California table grapes with foods that are traditional to the particular festival, such as moon cakes that are eaten during the Moon Festival,” said Day.

The CTGC is also directly contacting consumers in Hong Kong and South East Asia via a mailer campaign promoting the quality and value of California table grapes available at specified retailers. The goal, according to Day, is to “pull” the product through the retail level via enhanced consumer demand.

“We in turn are asking these retailers to promote California grapes with tastings, point-of-purchase materials placed in displays, as well as secondary placements throughout their stores.”