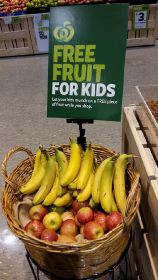 New Zealand’s largest supermarket chain Countdown has scored a massive public relations goal thanks to one of its store’s decision to provide free fruit for its shoppers’ children.

For the trial promotion, which took place in Countdown’s Botany store in Auckland, a basket of apples and bananas bearing the sign ‘Free Fruit for Kids – let your kids munch on a free piece of fruit while you shop’ was placed in a prominent position in the outlet’s fresh produce department.

The promotion caught the attention of radio station Hits NZ, which posted a photo of it on social media. Since then, the photo has gone viral, receiving hundreds of thousands of likes on Facebook and tens of thousands of shares.

“This is an idea we decided to give this a go at Countdown Botany in Auckland,” commented a spokesperson for Countdown. “We will be sure to let our Facebook fans know should it be offered in other stores.”

Meanwhile, the company’s communications manager James Walker told New Zealand’s Supermarket News: “We are excited that our customers got in behind the trial of free fruit for kids in our Botany store, and we’ve definitely heard them!”