Fruit and vegetable growers fear increase in fruit fly incursions, as ban is implemented across Australia 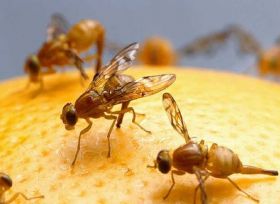 Australian producers are growing increasingly concerned about the increasingly limited number of effective pesticides they can use to stave off fruit fly incursions, according to the Weekly Times.

The use of fenthion, an insecticide commonly used to prevent outbreaks of Queensland Fruit Fly (Q-Fly), will be phased out during October, apparently leaving growers with few viable alternatives after the use of a similar pesticide, dimethoate, was banned earlier this year.

“We have already seen ­orchards removed on the east and west coast due to fruit fly,” Fruit Fly Action Group spokesman Brett Delsimone told the newspaper. “I don’t see why our regulators aren’t conducting reviews to get Australia up to speed. We’re just globally uncompetitive when it comes to molecular technology.”

Summerfruit Australia chief executive John Moore told the Weekly Times that producers were now turning to control practices such as baiting and trapping, prompting hope that incursions can be managed without the use of chemicals.