Morco Fresh has seen the growing popularity of Halloween in Australia offer an opportunity for ghoulish gourds, Mini Jacks and Jack-o’-Lantern carving pumpkins in October 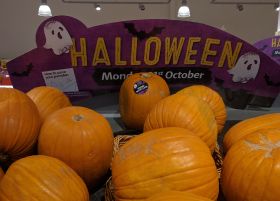 The Moraitis family has come back on board with Halloween this year after a two-year hiatus, now trading Halloween-inspired produce through its family-owned MorCo Fresh business, established in 2007.

The Moraitis family has been involved in the marketing and management of the Halloween programme in conjunction with Stackelroth Farms since 2006, working with chain stores to supply carving pumpkins and ghoulish gourds for decoration.

The family behind Moraitis Group took a step back from the business after Hong Kong’s Chevalier Group bought a majority share in the company in 2013. Since then, Moraitis Group has continued with the Halloween programme, including under the renamed business Oakville Produce, before it went into voluntary administration earlier this year.

Todd Moraitis of MorCo Fresh told Produce Plus that after Oakville went into receivership, he reconnected with Stackelroth Farms and regained control of the event again.

“Here we are running it again,” Moraitis said, adding they’ll be supplying chain stores and independents ahead of the event.

“It’s been a bit of a struggle as there have been many agronomic challenges in the growing regions this year. We also haven’t had the same lead up to the event this year, as we came on board for Halloween after the initial planning phase with the retailers, and have only had a short period of time to pull it all together,” Moraitis said.

“But, all of those prior years of experience have come in handy – we’re looking forward to building this Halloween programme again.”

This year, MorCo Fresh is trialling a white pumpkin, with several stores in New South Wales to stock the pumpkin ahead of 31 October.

“[The white pumpkins] are sold in the US, and while they’re not the dominant Halloween pumpkin, they do sell well,’ Moraitis says, adding that while Australia’s Halloween-celebrations are nowhere near as massive as in the US, the event has been gaining momentum since the Moraitis family first began trading its Halloween pumpkins.

Moraitis had expected the growing around 600 tonnes of pumpkins to be harvested for Halloween, but due to various climatic and agronomic issues, volume will be well down on what was initially planned.

“We’ve also had some interest from export markets, but because we took on this event so late, we weren’t able to service that part of the business,” Moraitis says. “Next year, we’ll have more time to plan, and we’ll look at food service as well – cruise ships, hotels, restaurants.”

As soon as 2017 rolls round, MorCo Fresh will start work on next year’s Halloween event planning with chain stores.

“We’ll have a discussion on what worked and what didn’t, and start planning for the next year,” Moraitis says. “Growers need to start bringing in seeds from the US, put them through quarantine, and ensure that planting schedules are aligned to demand so that harvest occurs at the right time. We need about a four to five week lead-up to the event in-store.

“The event’s definitely gaining momentum and we’ll definitely be more involved next year.”