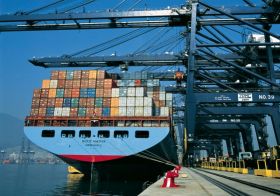 Shipping group Maersk Line has reported a loss of US$116m for the third quarter of 2016, as sustained pressure on container freight rates lead to a decline in average freight rates of 16 per cent.

In the group's interim report, Maersk Line said that it had "continued to deliver on strategic objectives in Q3, gaining market share with a volume growth of 11 per cent and continued improvement in network utilisation".

The group expects global demand for seaborne container transportation to increase by around 2 per cent, in line with previous expectation of 1-3 per cent.