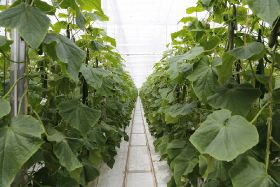 The Australian biosecurity department is working with the business to ensure other properties aren’t at risk, but said it wasn’t thought to be related to the 2015 case of CGMMV detected in melons in Charters Towers.

"Our first priority is to continue working with the affected business to develop a management plan to eradicate the virus from the greenhouses," said Mike Ashton, Queensland chief plant health manager. "While we are working with the Bundaberg facility to minimise disruption to their business as much as possible, stringent biosecurity measures have been put in place to minimise the risk of spread to other properties.

"They are not allowed to move host plant material off the property, machinery and equipment has to be decontaminated and there are measures in relation to other potential carriers of the disease."

The ABC has reported Eden Farms, one of the largest cucumber suppliers in the Southern Hemisphere, as the business affected, with both Biosecurity Queensland and Eden Farms owner Andrew Youngberry unsure of how the virus spread over four separate sites.

Ashton said the source of the virus could be seeds.