More than 400 delegates attended Global Berry Congress 2017 in Rotterdam, a record attendance for the annual event 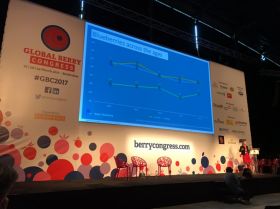 Elsewhere, retail specialist Bryan Roberts of shopper loyalty company TCC Global, spoke about “unparalleled change” over recent years in the retail arena, including a focus shift in favour of fresh food that stood to benefit the berry category even more in future. “The discount impact is coming in other markets like the US, Russia, South Africa, and the hypermarkets and supermarkets will need fresh categories to help them maintain a point of difference.”