HelloFresh is fastest-growing company in Europe 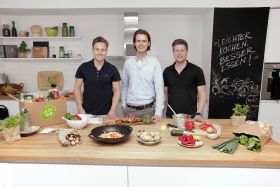 The dramatic expansion of Berlin-based HelloFresh’s meal kit delivery service across markets including the US, Germany, the Netherlands, the UK and Australia has propelled the company to the top of the FT1000 list of Europe’s fastest-growing companies.

The venture, which was only founded in 2011, saw its revenues rise from €2.3m in 2012 to €304m in 2015. Offering its 850,000 mail-order consumers an arguably more convenient means of introducing more excitement into their home cooking, it is already a business valued at €2bn and one that stands out in an already competitive market.

The group has also begun to expand into high-street retail and recently signed up with UK retailer Sainsbury’s to supply branded recipe kits following trials with Tesco and Waitrose.

Dominik Richter, chief executive and founder of HelloFresh said the company was "extremely pleased" to receive the award. "It is a wonderful affirmation of the entire HelloFresh team which has been working incredibly hard over the last five years – rising to new challenges each day."

According to Richter, the key to the company's rapid rise has been its ability to identify and act upon two major trends: a change in consumer attitutes to health and nutrition, and the enormous potential of online retailing.

"By focusing on the individual needs of our customers, we have succeeded in developing a unique, flexible, highly-personalised product," he continued. "In only five years, we have managed to build a successful business which is recognised worldwide. Ultimately, our strong growth demonstrates that innovative products, such as our [meal boxes], have huge potential, and demand is increasingly growing."

However, despite a series of major investments in what is now a publicly listed company, there are some who doubt the startup’s ability to deliver sustained growth as other similar companies like Gousto, Blue Apron and Plated get in on the meal kit act.