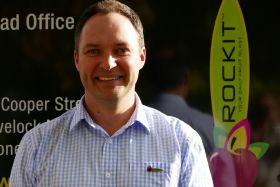 In his new role, Pay will report directly to Rockit Global chief executive Austin Mortimer, overseeing the global sales of the branded miniature snack apple, as well as support the development and co-ordination of grower-distributors across Rockit’s global network.

The small-sized apple, positioned as a snack and sold in tubes, is now grown in seven countries and sold in 22 markets, with the company exporting 77 containers of fruit in 2016, earning its maiden profit.

Rockit Global was established in March after former managing director of the Havelock North Fruit Company, Phil Alison, sold his shares in the New Zealand company that developed Rockit to private equity investors associated with Pioneer Capital and Oriens Capital for an undisclosed sum.

The Rockit Global board will retain four members of the Havelock North Fruit Company board including John Loughlin, Murray Denyer, Steve Saunders and Neil Craig, and will be joined by James Beale of Oriens Capital and Craig Styris of Pioneer Capital.