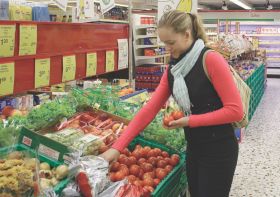 Global demand for fresh food increased by nearly 3 per cent in volume terms in 2016, in line with average growth achieved over the last five years.

That is according to the the latest statistics from market research provider Euromonitor International, which also pointed out that the Middle East and Africa and Asia Pacific were the most dynamic regions displaying growth above the global average and driving global consumption, mainly due to growing populations and improving disposable budgets.

The analyst said that the developed regions of Australasia, Western Europe and North America were showing limited growth due to high levels of maturity and saturation, with packaged food and drink posing serious competition to fresh food due to a demand for convenience and time-saving.

“Demand in Western Europe started to change to positive in 2016 departing from a negative growth sustained in the previous five years," said Anastasia Alieva, head of fresh food research at Euromonitor International. "Consumers concerned about obesity, diabetes and heart disease become increasingly aware of the need to review their diets and eat healthily.

"In response, grocery retailers, such as supermarkets and discounters accelerated their investments in fresh food supply across the borders," she continued. "Many have re-vamped fresh produce sections, including fresh meat and seafood, fresh fruit and vegetables. Revival of demand for fresh food was also driven by positive media coverage and popular cooking programmes that show the audiences how to cook from scratch in a short period of time.”

The research also showed that organic fresh food is outperforming its conventional offering in every core market.

Consumers who chose to eat healthily, allergy sufferers, parents with young children continue to seek organic products despite their higher price tag, while demand for more natural, cleaner and healthier products was driving organic sales not only in developed markets such as US and UK but also developing markets.

“In China, sales of fresh organics increased by almost 30 per cent in 2016 and by over 16 per cent in South Africa despite their high unit prices," Alieva said. "Broader availability of organic fresh food through store based retailers, on-line companies and direct sellers made it easier for consumers to find the organic option.

"Fruits and vegetables performed particularly well," she added. "However, the uptake of organic meat was somewhat constrained by price and fish and seafood by a lack of availability.”