Australian offering growing in popularity through pan-industry promotion in Thailand 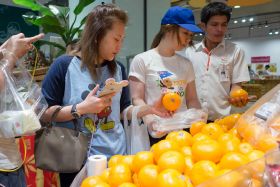 Mandarins are among a number of Australian export products enjoying rapid growth in the Thai market.

Stuart Rees, Austrade’s trade commissioner for Bangkok, says the citrus line has been a star performer in the Now! In Season promotional campaign, with substantial demand for the fruit ensuing from Thailand’s retail, food service and food manufacturing sectors.

“Australian Honey Murcott mandarins are highly regarded because of their vibrant colour, long shelf life and high sugar content with a well-balanced acidity.”

China was Australia’s largest market by value for mandarin exports in 2016, while Thailand emerged as the largest by trade volume. More than 7,770 tonnes of mandarins were exported over the course of the 2016 campaign, an increase of nearly 25 per cent according to the Australian Bureau of Statistics.

Now! In Season is a multi-industry promotional programme focused on South East Asian nations. As its name suggests, the programme markets Australia’s export offerings as they come into production.

To kick off this year's Now! In Season campaign, a launch event to promote the availability of Australian citrus was held in July. The event included cooking demonstrations using Australian navels and mandarins, while fruit dishes like citrus cake, citrus salad and citrus juice were served to guests.

A full version of this article appears in the July/August edition of Asiafruit.