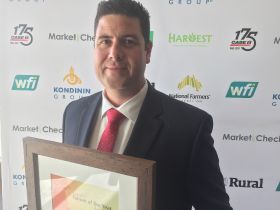 Bulmer was recognised for his hard work and commitment to the industry, which has included turning the small-scale vegetable farm in Victoria’s Lindenow into a large-scale operation.

Bulmer Farms produces 40 tonnes of baby spinach and salad as well baby broccoli, supplying around 40 per cent of all cut lettuce to Australian supermarkets, according to the ABC.

The 2017 Farmer of the Year now wants to invest in better use of the waste that comes with large-scale vegetable production.

"At the moment we trim the stems of our baby broccoli, so we've got waste with that product probably to the tune of 3 to 4 tonne a week,” Bulmer said. "We've turned that into some powders and the health properties are quite good, so we're looking at how we can utilise that better going forward."

Ausveg CEO James Whiteside praised Bulmer for his leadership on issues such as environmental sustainability and engaging younger generations in horticulture.

“He’s played an active role in many industry initiatives that aim to deliver benefits to all growers, from hosting soil health field trials to inviting students on farm visits so they can learn more about the huge range of career opportunities available in horticulture,” Whiteside said.