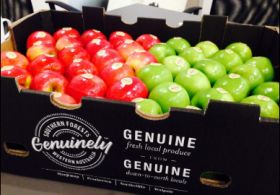 More than one-third of shoppers in Perth now recognise the Genuinely Southern Forests brand, less than four years since it was launched.

That’s according to research conducted by the Southern Forests Food Council, which is gearing up to launch its second annual marketing campaign at independent greengrocers across the Perth metropolitan area.

Running from 7 October to 9 June 2018, the campaign will include in-store tastings and branded seasonal products delivered to 17 greengrocers, which Southern Forests Food Council executive chairman Bevan Eatts said would offer a platform for Southern Forest producers to reach consumers directly.

“A number of last year’s participating retailers commented, this is more than just a brand building exercise. It is providing a true connection for consumers with a region, the produce that it grows, its farmers and its community. It tells the whole story,” he added.

“We look forward to working with our 17 retail partners, who are truly some of the top greengrocers in Perth, on bringing consumers a greater understanding and appreciation of where their food comes from and providing them with their own genuine taste experience at the in-store tasting events.”

The Food Council represents more than 270 producers in the region, from fruit and vegetable growers to wine and honey producers.