Following an agreement to boost trade relations, the tropical fruit has been approved for export to New Zealand 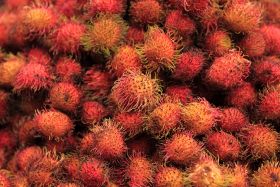 Rambutans have become the third fruit approved for export from Vietnam to New Zealand. Following mangoes in 2011 and dragon fruit in 2014, rambutans from Vietnam made their debut into New Zealand on Tuesday 10 April.

New Zealand ambassador, Wendy Matthews, made the announcement in Hanoi at a ceremony held by the New Zealand embassy and Vietnam’s Ministry of Agriculture and Rural Development.

VN Express reported that two-way trade is expected to increase following the recent signing of the Comprehensive and Progressive Trans Pacific Partnership (CPTPP).

The move also follows talk between the two nations to increase their trading habits.

“When the two countries cooperate, we can share with each other products and experience regarding the field of agriculture,” said Matthews.

Vietnam’s vice minister of agriculture, Le Quoc Doanh, said he was pleased in gaining access to a strict market like New Zealand. He also mentioned that the ministry will now begin discussions around when the first shipment of fruit will sail, and at what price.