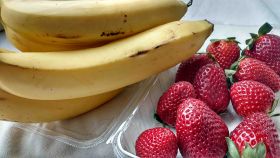 Another day and another confirmed detection of needles in Australian fresh produce, with the scare now spreading to a second commodity line.

Following on from reports of needles being found in strawberries across the country over the past week, a 62-year-old woman has allegedly been caught inserting a needle into a banana in a central Queensland supermarket.

Queensland Police have confirmed the woman is assisting with their inquiries, with local authorities confident it was an isolated incident without any links to other food contamination investigations.

The news came after police in Western Australia confirmed they had received their first complaint about contaminated strawberries in their state.

A man reportedly found a needle in his kitchen sink, where he had been preparing strawberries for his family earlier. The man told police he had no recollection of the needle being there prior to washing the strawberries.

While the incident marks the first positive detection in Western Australia, contaminated strawberries grown in the state were found in South Australia over the weekend.

The incident has prompted an immediate response from the West Australian strawberry industry.

“[We] are looking at lots of different ways of tackling this issue,” Neil Handasyde, president of the Strawberry Growers Association of Western Australia, told ABC Radio. “There’s been metal detectors purchased and tamper-proof packaging looked at.”

Handasyde said he had spent A$20,000 on a metal detector for his own berry farm.

Export season draws to a close

Western Australia exports the most strawberries of any Australian state, accounting for 85 per cent of the 4,585 tonnes (A$31.9m) sent internationally from the country over the 2017/18 season, according to the Australian Buru of Statistics (ABS).

However, with 72 per cent of Australian strawberries exported in the July­–September quarter in 2017/18, the incident appears to have come at the tail end of the peak export season.

The money will be used to on promotions highlighting the quality of Queensland strawberries and investigate how to further improve traceability and integrity in the supply chain.

“This past week, Queensland has been the victim of an ugly, calculated and despicable crime,” Palaszczuk said.

“The sabotage of our strawberry industry is not just an attack on hard-working growers and workers, but it reaches into almost every home and school lunch box.”