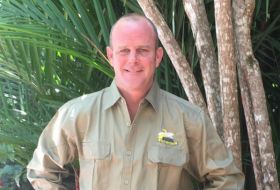 From his former role as team leader for one of Biosecurity Queensland’s TR4 surveillance teams, Carl Rickson is well positioned to take on his new role as plant health officer with the Australian Banana Growers’ Council.

Rickson will spend some of his time visiting farmers in the region, who may already recognise him from his previous role.

Through this new appointment, Louis Lardi will transition toward retirement, guiding Rickson over the coming months before he steps away permanently.