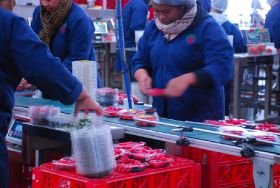 Under new reforms, working holiday makers now have the option of qualifying for a third-year visa by undertaking an additional six months of regional work in their second year.

Currently, the visa is limited to two years, with the second year only becoming available through undertaking 88 days of regional work.

The changes will also dictate that backpackers can work with a single farmer for up to 12 months (extended from six), and the age limit for a working holiday visa will be extended from 30 to 35 years.

The age extension has been granted as of 1 November for Canadian and Irish residents, and will continue “with priority to all other countries” according to a release from the National Farmers Federation.

Alongside the new backpacker visas (namely the 462 and 417), there’s been an update to the Seasonal Worker Programme which allows growers to employ workers from Pacific nations and Timor Leste.

Employees under the programme will now be allowed to work up to nine months, and for employers out of pocket costs will be reduced, as well as the requirement to prove specific skills shortages.

"The $1.5 million allocation of funding for the Fair Farms Initiative gives industry an opportunity to roll out a practical market recognition scheme that enables farm businesses to demonstrate that their employment practices comply with Australian laws and industry standards,” Growcom chief advocate, Rachel Mackenzie said.

Growcom has commenced a pilot of the national Fair Farms certification and training, which will give growers the tools they need to treat workers fairly, the organisation said.

The initiative includes a code of practice, an online self-assessment tool, training options, and third-party certification and auditing if required.

"Growcom has long been a champion of treating workers fairly in the horticulture industry and continues to make significant steps in assisting growers to meet and demonstrate compliance with workplace legislation,” Mackenzie said.

A full roll-out of the Fair Farms Initiative is expected for early 2019.