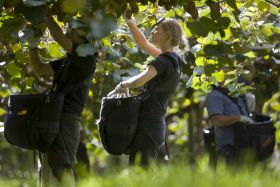 With forecasts pointing to a larger overall crop than 2018, NZKGI chief executive Nikki Johnson said around 18,000 workers will be required to manage this season’s harvest, which gets underway in mid-March.

“Last year, the harvest was at least 1,200 workers short at the peak – we don’t want a repeat of that,” Johnson explained.

NZKGI’s campaign will target the unemployed, local students, retirees and backpackers. Johnson said the aim is to highlight what the industry can offer and address any misconceptions about harvest work.

“There is a workforce out there that we think would be great in our industry; we just have to tell them about it and let them know what’s in it for them,” she explained.

While first priority will be given to New Zealand residents, NZKGI is casting the net far and wide to attract as many seasonal workers as possible.

“We’ll also be sharing great content with potential employees, including a video of German and Czech backpackers sharing their orchard experiences, and a short but fact-packed guide to working in the sector,” Johnson said.

The campaign is focused on recruiting workers over the peak harvest window from March through June.

“There’s also a large number of workers needed in the packhouses in a wide range of processing roles, as the fruit leaves the orchards to be prepared for distribution overseas,” Johnson said.