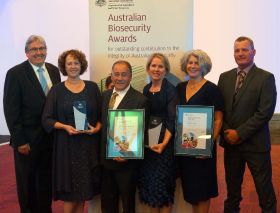 Strawberry Springs in Victoria’s Yarra Valley has been crowned Australia Farm Biosecurity Producer of the Year in the 2019 Australian Biosecurity Awards.

Luciano Corallo of Strawberry Springs was nominated for his preventative approach to disease and pest management, as well as his active participation in surveillance and willingness to host biosecurity workshops on-farm to share his knowledge with the industry.

“Luciano has shown not only his commitment to on-farm biosecurity but also a firm understanding of its importance to the wider industry,” said Plant Health Australia’s executive director and CEO, Greg Fraser.

“He plays an active role in encouraging others to take proactive steps to secure their farms, made all the more effective by his enthusiasm for demonstrating his own on-farm practices.”

Nathan Hancock, CEO at Citrus Australia was also recognised individually in the Industry Category for his work on the outbreak of citrus canker in 2018.

Cattle producer Melinee Leather was also awarded alongside Strawberry Springs as producer of the year.