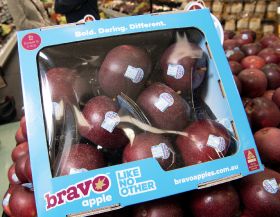 The team behind the Bravo apple brand has come up with an innovative way to differentiate the offering.

A limited-edition Bravo apple gift box is being offered to consumers this season, in a bid to position the fruit in the premium segment of the apple market.

Designed specifically for high-end customers in the burgeoning export markets that Bravo Apples are targeting, the gift has also been well received in the Australian domestic market.

Known for its standout burgundy colour, Bravo also has high antioxidant levels compared with other apples. Therefore, the gift box allows consumers to “give the gift of good health”, according to Nardia Stacy, executive officer of Fruit West, which holds the exclusive licence to commercialise Bravo.

“With chocolate overdoses over the Easter break, consumers are gearing up for the winter ahead and seeking out local, seasonal produce that’s nutritious and tasty,” Stacy explained. “Bravo apples are exactly that. One of these colourfully healthy apples a day will certainly keep the doctor away.”

This month marks the start of the fourth commercial Bravo apple harvest and weather conditions have meant that the fruit matured a little earlier than anticipated, giving consumers an early taste test of what the season ahead has to offer. Bravo apples will be available in major supermarkets, independents and greengrocers from now until October.

“It’s really a grower’s dream to have your product in such high demand,” said Bravo grower-packer, Mario Casotti, from the Perth Hills. “Bravo has the extra dimension of flavour – it’s like an amplified Pink Lady.”

The ANABP 01 variety (to which Bravo lends its name) is the product of 20 years of breeding and development by the Western Australian Department of Primary Industries and Regional Development at the Manjimup Research Station. The apple was bred to respond to evolving consumer preferences and to mitigate on-farm production risks for producers.