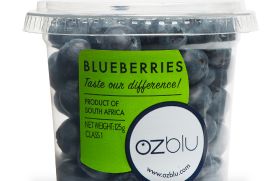 United Exports has announced that Sebastián Ochoa Münzenmayer, a blueberry specialist, has entered into an exclusive commercial agreement with United Exports, as the company is rapidly expanding its international footprint of its Ozblu blueberries.

According to the group, Münzenmayer is considered to be one of the world’s few thought leaders with his expertise on low-chill evergreen blueberries.

Roger Horak, the founder and global CEO of United Exports and co-founder of Ozblu, said that Münzenmayer was one of the most highly skilled and respected individuals in the blueberry industry around the globe.

"To have him work for us exclusively will give us a huge strategic advantage in a very competitive and fast growing industry," he explained.

Commenting from Perth, Dave and Leasa Mazzardis the owners and breeders of Nature Select breeding programme, and co-founders of Ozblu Blueberries, said: “As we have been able to produce superior genetics, part of the next challenge is scaling them commercially and Sebastian has been part of our journey for several years, so we are delighted that he has agreed to work with us exclusively.”

He has consulted globally to many companies, as well as lectured and delivered papers at various universities and conferences on subjects such as production, quality control and agricultural techniques in berry production.

According to Horak, Münzenmayer saw the potential with United Exports and Ozblu, and likewise, he is committed to ongoing research and development.

“It was not a difficult decision to enter into this commercial arrangement with United Exports, yes the genetics are simply class leading globally, but working with such a dynamic and committed team of people makes all that more exciting”, commented Münzenmayer.