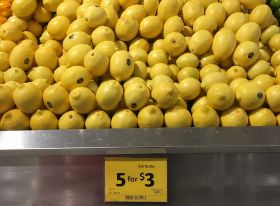 A biosecurity breach made when an Australian resident attempted to smuggle infected budwood into the country was met with a A$7,000 fine.

Citrus Australia CEO, Nathan Hancock expressed his distaste in the punishment handed to John Victor Bigg who committed the offense and said the punishment should have been harsher.

Citrus Australia said Hancock has asked judges in future cases to consider the impact these items would have on the national horticulture industry, and to set an example through tougher penalties in future.

The citrus plant cutting reportedly tested positive to two viruses that could cause diseases in citrus and also contained insects.

“A fine of A$7,000 for importing a prohibited item and providing false and misleading information to Customs officers is grossly inadequate when you consider the economic damage that could have occurred,” Hancock said.

Hancock noted deliberate acts like this put the livelihoods of thousands of Australians working in rural and regional Australia at risk and could decimate the A$800m citrus industry.

Fines of up to A$63,000 and a jail term of up to five years are now in place for Australians who fail to declare plant or animal matter upon arrival at customs.