Water crackdown gets thumbs up 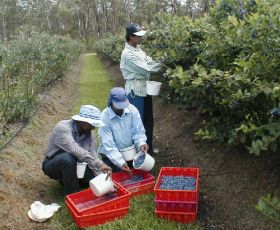 Executive director Rachel Mackenzie said that the industry had taken significant proactive steps in relation to ensuring growers know the rules, but fundamentally these rules have to be enforced by government.

“The blueberry industry has invested significantly in the development of a code of conduct and for the last year we have been working with growers to help them become compliant,” said Mackenzie. "The Natural Resources Access Regulator has an important job to do and if there is found to be instances of deliberately non-compliant activity then they should take the appropriate action.

"As the peak industry body, it is our job to ensure that growers have the right information and tools to be compliant and we are very pleased to be working with the NSW government through the Coastal Catchments Initiative," she continued. "Fundamentally the actions of a few growers are causing great reputational damage to this incredibly important industry for the region and as a peak body we support those who do the right thing."

The Coffs Coast blueberry industry is estimated to bring around A$250m worth of value to the region as well as attracting seasonal workers to the region which creates local jobs in a range of support sectors.

"We see this action by the NSW government as an important step to manage some of the community concerns around blueberry production and will give the Coffs Coast Council confidence that the introduction of development approvals for the region are not needed and will have unnecessary economic consequences for the region," Mackenzie added.