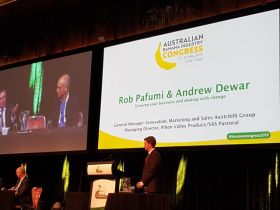 Andrew Dewar of Picton Valley Produce and Rob Pafumi of Austchilli Group discussed their experience and insights into ‘change’ on the second day of the banana congress with MC Ashley Walmsley.

More than 300 delegates from all areas of the banana industry descended on the Gold Coast for three days last week as they heard about the challenges and opportunities they face going forward.

Paul Inderbitzin, chairman of the Australian Banana Industry Congress, welcomed delegates and was excited by the opportunities the congress provided growers to be motivated to grow their industry through innovation, marketing, export and research and development into the future.

One of the headline speakers, Australian social commentator Bernard Salt, enthused the audience with his talk about changing consumer demographics.

He presented figures to demonstrate the increasing affluence of the Australian population over the next ten years and importantly, a greater shift to one and two-person households.

Salt explained with people living longer in retirement and living active lives with more disposable income, there is increasing demand for fresh, convenient and healthy products to suit these lifestyles, creating opportunities for bananas even though demand had softened.

Tate Connolly of Hort Innovation agreed that banana consumption had fallen around 2 per cent in 2018. Despite this, the value had increased by 8.3 per cent helped by the industry’s ‘Peel Good Feel Good’ advertising campaign.

Delegates also gained insights to the global banana market with presentations by Marc Johnson of Fyffes and Wayne Prowse of Fresh Intelligence Consulting.

Johnson spoke of his experience working with Fyffes, growing bananas in Costa Rica and in the supply chain in Europe and North America.

However, Prowse said that due to Australia’s geographic location it was like Northern Australia was “exporting” some 400,000 tonnes of bananas to Southern Australia with the overwhelming majority of produce consumed domestically.

Of Australia’s 450,000 tonnes of fresh fruit exports in 2018, just 94 tonnes were bananas which represented both and opportunity and a challenge.

The event was filled with more export case studies, applied research and on farm case studies for delegates to take in.  The congress concluded with the banana ball where Peter Molenaar, Stephen and Gavin Mackay, Ian Liddle, Les Blennerhassett received Awards of Honour for their contribution to the banana industry.