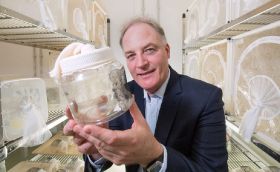 This comes on the back of A$3.7m (US$2.4m) in funding the centre received earlier in May, as part of the Australian Research Council’s Industrial Transformation Research Program.

Over the past five years, significant investment has been made in development of the Sterile Insect Technique (SIT) through the Horticulture Innovation Australia ‘SITplus’ partnership.

In this technique, millions of flies are produced in a factory, sterilised, and released in the field to prevent reproduction of pest populations and to eliminate outbreaks.

SIT is more effective if only males are released. While male-only ‘genetic sexing’ strains are available for some overseas fruit flies, this project aims to develop the technology for the Queensland fruit fly.

While the CFFBI will work with the CSIRO and South Australia Research Development Institute to reproduce these traits in Queensland fruit fly.

“Producing male-only sterile fruit flies will be a far more efficient and cost-effective in the fight against this destructive pest.”

Dan Ryan, SITplus program coordinator, said millions of sterile flies were already being produced at a Port Augusta factory and released to support the prevention and reproduction of pest populations and outbreaks.

“Queensland fruit fly costs the Australian horticulture sector A$300m (US$196m) per annum in lost markets by impacting production in two ways – damaging produce in the field leading to yield loss, and by affecting the market access or acceptability of the crops in international markets,” he said.

The flies can even pose a threat to international growers such as those in New Zealand, the country has detected and trapped a number of Queensland fruit flies this year.