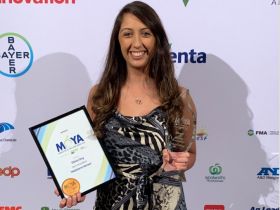 Produce Plus and PMA Australia-New Zealand are pleased to announce Olivia Grey of Hort Innovation as the winner of the Marketer of the Year Award (MOYA) 2019 for the ‘Hailstorm Heroes’ campaign.

Grey was presented with Australasia’s premier marketing award for the fresh fruit, vegetable and floral industries at the Hort Connections conference and trade show in Melbourne. The presentation took place during the event’s Gala Dinner last night (26 June).

The Hailstorm Heroes campaign was activated in 2018 after a severe hailstorm swept through South Australia’s major apple and pear production regions. The campaign urged consumers in South Australia and the Northern Territory to support hail-affected growers by overlooking small superficial marks on the skin of their fruit.

An integrated above and below the line marketing campaign was executed to drive awareness and purchase intent of Hailstorm Heroes fruit. This included wide-reaching radio, social media and PR campaigns – all of which surpassed their KPIs – along with a highly successful programme of in-store demonstrations held throughout South Australia and the Northern Territory.

Tracking of the pre-pack bags revealed South Australian consumers crunched their way through 1,000 tonnes of hail-damaged apples and pears. The average wholesale price achieved for fruit sold through the Hailstorm Heroes bags was A$1.50 per kilogram, with a return to the grower of approximately A$0.70 per kilogram.

The campaign’s ability to align a broad range of industry stakeholders was also well regarded, as was its ability to create a value proposition for a crop otherwise destined to go unpicked, in the process addressing a pressing consumer concern regarding food waste.

“Hort Innovation are honoured to be recognised by PMA and Produce Plus for this prestigious accolade. I am proud to be representing women in horticulture at a time when women are making waves in all levels of agriculture and innovation,” Grey said last night.

“This wouldn’t have been possible without the support and collaboration from industry and in particular South Australian growers, and Susie Green, CEO of Apple and Pear Growers Association South Australia and the retailers.

“Their support during this campaign ensured that our hard working growers who were affected by the extreme hailstorm received a return on their produce.”

The Hailstorm Heroes campaign was chosen from a strong field of five finalists for the Marketer of the Year Award. The four other finalists were:

•          Sona Padman of Freshmax Australia for the ‘Modi Apples’ campaign

•          The Costa Avocado Team for the ‘Lovacado Brand Launch’ campaign

The five finalists presented their campaigns as part of a MOYA Showcase event on the trade show floor at Hort Connections earlier in the day. 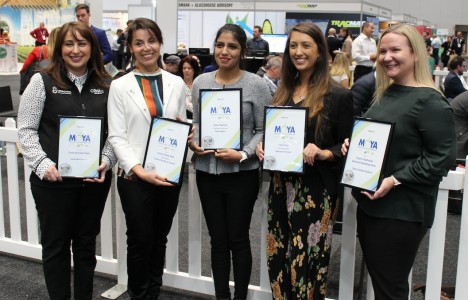 The 2020 PMA-Produce Plus Marketer of the Year Award will be presented at next year’s Hort Connections, being held in Brisbane in June. The award continues to celebrate outstanding achievement in the field of fresh produce and floral marketing across Australia and New Zealand. It is open to both individuals and team members from any part of the value chain.