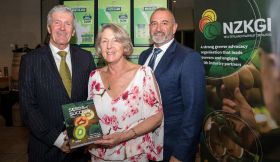 Founding NZKGI chairman Hendrik Pieters and current chairman Doug Brown told guests – including New Zealand minister of agriculture Damien O’Connor – about the challenges and successes of the industry over the last quarter of a century. These included the crisis of the Psa outbreak, as well as grower solidarity around the single desk model and the Kiwifruit Industry Strategy Project (KISP).

“It is an honour to chair NZKGI not only through its 25th anniversary, but also at a time when the kiwifruit industry is booming,” said Brown.

“During this time of growth, NZKGI’s role has never been so important in areas such as labour, water and the right to grow as we pave a path for the industry to meet forecast volumes.

“Being a primary industry, you also don’t know what’s coming around the corner, so NZKGI will be needed for many more years to come to advocate for New Zealand’s kiwifruit growers.”

NZKGI’s book Seeds of Success: The Stories of New Zealand’s Kiwifruit Pioneers, was also launched at the gala event. The book, authored by award-winning journalist Elaine Fisher, is a collection of stories detailing the innovation and personalities behind some of the industry’s founding members.