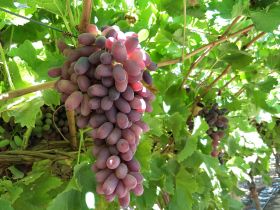 Australian grapes have had a strong season in China with newer varieties gaining traction with consumers according to Shanghai-based importer Frutacloud.

The company said 9kg packs of Autumn Crisp grapes hit a record high price of RMB 700 (US$101.86) before Mother's Day (12 May), while the most popular variety, red, seedless Crimson grapes continued to see strong demand.

China accounts for around 37 per cent of the approximately 110,000 tonnes of table grapes Australia exports from January to late June, with this season delivering good quality grapes thanks to good weather conditions said Frutacloud.

Large volumes of Crimson were shipped by sea to meet strong demand with the peak period falling between March and April.

The company said Australian Crimson is the first choice during this period as domestic production of Crimson has not started in China and grapes from Chile and South African could not compete for colour and taste. Meanwhile, packaging innovation also helped to meet a wider demand.

“The 9kg coffin pack continues to be used, more and more gift boxes in 4.5kg stem up pack arrive to cater to the trend of Chinese consumer’s demand,” Frutacloud said.

Even with these promising results, Frutacloud believed the Australian grape industry has even more potential in China.

“In the long run, Australian grapes have an anti-seasonal production superiority and enjoy zero tariffs in China starting from this year,” Frutacloud said.

“More and more people are going to Australia to seek investment and plantation opportunities. Some importers even send domestic staff to Australia to participate in the packaging process. Frutacloud is also actively seeking opportunities to discuss joint venture planting with some growers.”