Suppliers respond to pockets of demand in Europe and Asia, with carrots and onions leading the charge Potatoes were another growth driver, with exports up 34 per cent year-on-year to 47,000 tonnes. Almost 6,000 tonnes of fresh potatoes were sent to Thailand for processing, marking the first trade since 2013.  South Korea is Australia’s main fresh potato export market, taking around 18,000 tonnes over 2018/19, while the Philippines took 4,500 tonnes, similar levels to the previous year.

Carrots accounted for 47 per cent of all fresh vegetables exported from Australia over 2018/19. The carrot trade rose by 2 per cent to 113,000 tonnes, with Middle East markets, including the UAE, Saudi Arabia and Kuwait, the main destinations.  Carrot exports to Japan increased 34 per cent to 3,600 tonnes. Japan’s overall carrot import trade (all sources) lifted 25 per cent to 120,000 tonnes over 2018/19.

Cabbages, lettuce and other leafy greens were the only vegetable sectors to dip over 2018/19, after a few years of strong growth. These higher value lines service niche markets in Asia, particularly Singapore, and compete with leafy green vegetables in abundant supply from China and other Asian markets. 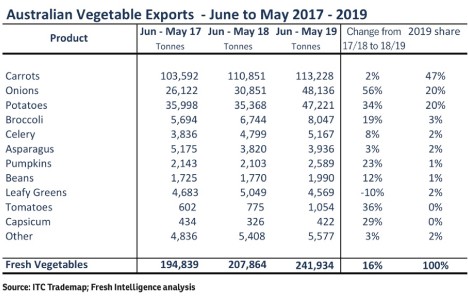