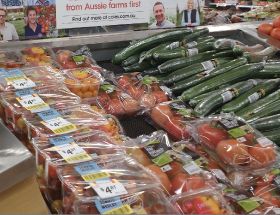 An estimated 7.3m tonnes of food, valued at A$20bn, is wasted annually in Australia.

New research undertaken by RMIT and Empauer, commissioned by the Australian Fresh Produce Alliance (AFPA), has revealed that packaging can play an important role in reducing food wastage.

It mapped the lifecycle of ten fresh produce items, including blueberries, strawberries, mushrooms, snack-sized tomatoes, leafy salad and cucumbers, with and without packaging, and found product protection and extension of shelf life among the benefits of produce that is properly packaged.

“What this research demonstrates is there are real practical reasons for using packaging for certain types of fresh produce,” said Rogers.

In some cases, the perceived benefits of reducing single-use plastic aren’t actually all that beneficial, according to the findings.

“A good example demonstrated by the research is the use of punnets to package berries. The environmental impact of the waste generated from damaged, unsellable fruit actually outweighs the impact of utilising the punnet,” said Rogers.

Food wastage is an element often unknown to the average Australian consumer. ABC Australia’s War on Waste programme aimed to increase awareness on the impact that both single-use plastic and food wastage has on the environment, however there’s another, even more important factor at play; cold-chain supply.

The research found cold supply chains to be integral to preserving the life cycle of produce.

The distances that much of Australia’s produce has to travel means sophisticated cold chain technology is necessary in maintaining produce integrity.

Research also identified a clear link between plastic packaging and the establishment of new markets for previously out of specification produce, such as oddly shaped or smaller produce.

Rogers indicated consumer education surrounding the use of plastic packaging had an important role to play in the future.

“It is important that consumers better understand why producers utilise particular packaging formats, whether it be to ensure product integrity in the supply chain, extend shelf life and/or reduce food waste.”