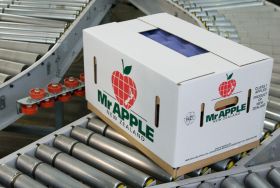 Scales Corporation, owner of leading New Zealand apple grower-packer-exporter Mr Apple, has posted a net profit of NZ$36.4m for 2019 (12 months to 31 December), a 2 per cent increase compared to 2018.

Total profit for the year was recorded as NZ$121.6m, supported largely by the sale of Polarcold (worth NZ$73m including interest), the part-sale of Meateor’s New Zealand operations (NZ$9.8m gain), and the company’s ongoing orchard redevelopment. Scales’ horticulture division reported earnings of NZ$39.7m before tax, with 5.95m TCE’s (tray carton equivalent) exported, representing a two per cent increase on previous year totals.

For the first time, more than half (57 per cent) of the company’s apple exports were made up of premium varieties, a milestone that managing director Andy Borland highlighted.

“The challenges with traditional apple varieties and the European market in particular validate our ongoing redevelopment investment away from these varieties."

Phase two of Mr Apple’s orchard redevelopment is nearing completion, with 175ha of premium orchard featuring new plantings of Dazzle and Posy, varieties the company has proprietary interest in, expected to come on-line by 2022.

Scales’ is planning to invest a further NZ$25m this year, with funding going towards further orchard redevelopment as well as into modern post-harvest facilities, said Borland.

“The facilities will be located in close proximity to other infrastructure and optimally designed to deliver enhanced labour efficiencies, including the new coolstore at Whakatu.

“The coolstore will not only take advantage of the latest technology to deliver improved labour efficiency, it will also significantly cut down on truck movements, lowering both Mr Apple’s carbon footprint as well as improving transportation efficiencies.”

The company is also investing resources into in-market branding, with results already beginning to show.

“We’ve seen an increase in the proportion of fruit sold directly through e-commerce and retail channels as well as an increase in sales to China in particular,” highlighted Borland.

Scales Corporation chairman, Tim Goodacre, said the company are aiming to be proactive in mitigating any potential impact of the coronavirus.

“The impact on Scales and Mr Apple in particular from the outbreak remains uncertain, but it’s expected that any impact will be mitigated by a number of actions.

“We are aiming to have a balanced global supply situation in 2020, with sales equally focussed between Europe, UK and Asia. Initial shipments to Asia are scheduled to arrive in early March, and to China in mid-March,” said Goodacre.

“To date we’ve had no issues with shipping to non-China markets, and there appears to be a strong pipeline of sales from the e-commerce channels in Asia, balancing out a potential reduction of in-store sales.”