Australian citrus seeks to stay on a roll

Citrus Australia reflects on a record 2019 export campaign, with initial crop forecasts for 2020 raising hopes of a repeat performance 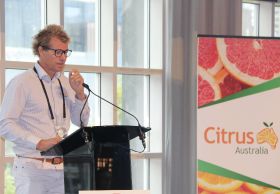 Australia’s citrus exports topped A$500m for the first time in 2019, a significant milestone in another record-breaking campaign, according to results announced at this week’s Citrus Market Outlook Forum event in Melbourne.

Rounding up the 2019 export performance, David Daniels, Citrus Australia’s general manager of market development, said Australia shipped some 304,000 tonnes of citrus worth A$541.5m across its global markets in 2019, a 19 per cent increase in volumes compared with 2018.

Oranges made up more than 208,000 tonnes (around 68 per cent) of total citrus exports, marking a 10 per cent on the previous year and garnering A$315m.

Mandarins saw standout growth, increasing 47 per cent to more than 90,000 tonnes worth A$215m.

China remained the biggest export market for the industry, taking around a third of total sendings. In the orange category, China accounted for 25 per cent of shipments, with Hong Kong taking a further 15 per cent. On mandarins, China made up more than 33 per cent of exports.

Despite remaining the leading market, China’s intake of Australian oranges dropped off in 2019, falling to just over 52,000 tonnes, a decrease of around 16 per cent on 2018. The decline reflected the size profile of the 2019 crop, which was dominated by smaller fruit, Daniels explained.

“The Chinese market continues to grow for us, even though it was down a bit on oranges. Our fruit profile on oranges was not so well suited to China last year. Still, it was pleasing to see them take a wider range of grades and sizes along with the traditional premium product."

With less oranges going to China – a high-value market – in 2019, the average per kg export price also eased off, but total export value still increased, and Daniels said the initial signs point to a more ‘marketable size range’ in 2020.

“Last year, we had a huge crop of smaller fruit, whereas this year sizing is looking much more favourable. We’ll have fruit in a more marketable size range. The quality also looks good, with a low level of blemish, and we’ve got the best exchange rate we’ve had in decades. This year is looking like a good crop for China.”

Strong demand from China drove a standout performance for mandarin exports in 2019, which surged by 47 per cent in volume and 60 per cent in value. But China was not the the only strong performer among mandarin markets.

“Thailand has been a fantastic story in mandarins – there’s been a stellar performance on Queensland mandarins, and that’s credit to the Queensland Citrus Exporters’ Group that has been working on marketing and promotion for close to a decade,” said Daniels.

Japan held steady as Australia's second largest-market on oranges in 2019 – at 35,000 tonnes – while markets that take smaller fruit such as Malaysia, Singapore and the United Arab Emirates all performed strongly.

Daniels singled out the Philippines as a market that has been “a shining light” for the industry. Australian citrus exports to the Philippines broke the 10,000-tonne mark for the first time in 2019, building on the gains made since “meaningful access was secured in 2012/13”.

“We needed another ‘handy market’, particularly with some of the challenges we’ve faced in other markets like Indonesia in recent years. The Philippines takes sizes and grades that are not popular in other markets – and this is really important to our growers and packers.”

Despite the strong export performance and bright future outlook, Daniels noted some competitive threats on the horizon, not least in the Philippines.

“Our understanding is that access for South African citrus to the Philippines is a done deal,” said Daniels. “Up until now, our main competition in the Philippines has come from Argentina, which supplied around 10,000 tonnes last year, but South Africa will would be very competitive in this market.”

Indeed, Daniels said South Africa represents a growing competitive force across Asia as its citrus export industry seeks to diversify its presence and reduce its reliance on traditional markets in Europe.

“The European market is growing ever tougher for them with MRLs and other factors, and their motto is to ‘push east', with big aspirations in markets like China and the Philippines. South Africa accounted for more than 200,000 tonnes of China’s citrus imports last year, and we saw the advent of specialised reefer shipments from South Africa into Japan and China.”

Chile also secured access to China for citrus last year, Daniels noted, in a development that is expected to drive citrus plantings in the Latin American country. “Chile is not to be underestimated and they could present a competitive threat in this market. We saw the impact they had on Australian citrus in the US market.”

Despite the increased competition and emerging challenges across global markets, including the spread of coronavirus (Covid-19), Daniels remained cautiously optimistic about Australia’s 2020 prospects. “There will be challenges like every year, but we have managed these in the past and the industry is in a strong position to do so again this season.”