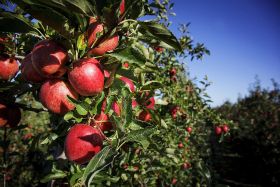 Export volume is expected to be up 3 per cent on 2019 figures, with 22.7m cartons (18kg) destined for customers in more than 80 countries.

NZAPI chief executive Alan Pollard said a notable trend in this year’s forecast was the continued move away from some “traditional” varieties.

“We lead the world in the development of new varieties and in the past 12 months we have seen increased plantings of Pink Lady, Dazzle, Jazz and Rockit,” Pollard explained. “The Braeburn export crop is expected to be 19 per cent down on last year and 30 per cent (approximately 1m cartons) down from 2018.”

Pollard said the positive forecast is pleasing, especially given localised hail events during the growing season.

“The spring weather in the main regions was very good and there is potential for larger fruit with great eating attributes,” Pollard explained. “We have had a good blossom, a high fruit set and excellent early fruit colour development. All of this indicates a high-quality season for New Zealand apples and pears.”

Apple plantings nationally have increased annually by between 2–4 per cent for the past six seasons, with the majority of new plantings in the past 12 months occurring in Hawke’s Bay and Gisborne. Total registered plantings in New Zealand have now reached 10,396ha.