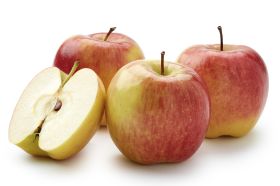 Short but sharp; that’s how Montague will approach the sales programme for Ambrosia apples in Australia this season.

The leading family-owned fresh produce company introduced the branded offering to customers at Costco, along with selected greengrocers and independent supermarkets, this week.

“This will be a quick season which will remain for only a few short weeks,” Montague explained in a release.

Ambrosia was discovered as a chance seedling in British Columbia, Canada, in the early 1990s. It takes its name from ancient Greek and Roman mythology, meaning ‘food of the Gods’.

The variety is being launched in Australia with eye-catching branding and the tagline: ‘Mmmbrosia. Sweet by Nature’.