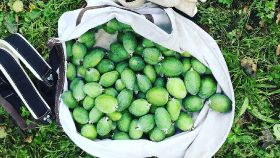 As the 2020 New Zealand feijoa season closes in on its April peak, the Feijoa Association has predicted a 20 per cent increase on 2019 volumes.

Julia Third, director of the Feijoa Association, said around 1,500 tonnes of feijoa are expected to be harvested this season and supply should remain plentiful until the end of June.

“Feijoas are successfully grown in many parts of the country including Nelson/Tasman, Gisborne, Bay of Plenty, Waikato, Auckland and in the far North,” Third said.

“This year’s drought has provided an extra challenge but for orchards with irrigation the fruit size will be on par with previous years.”

To help ensure this season’s crop goes home in the hands of New Zealand consumers, the Feijoa Association is promoting the health benefits of the fruit.

Third said consuming two feijoas provides 64 per cent of the recommended daily intake of vitamin C in the form of a useful snack.

“Feijoas are really high in vitamin C. With the flu season coming up, it’s more important than ever to consume plenty of fresh fruit to boost our immune systems and fight off any coughs, colds or bugs,” said Third.

Third also noted the versatility of the fruit and said it can be incorporated into everything from breakfast smoothies to muffins or simply eaten straight off the tree.

“Generations of New Zealanders have grown up eating as many feijoas as they can handle from the tree in their back garden. The flavour is truly unique so make sure you enjoy them while they’re in season this year,” said Third.