Sarah Corcoran has officially commenced in her new position, taking over from Greg Fraser 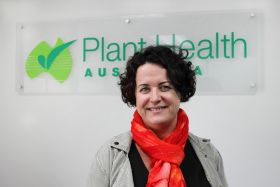 Plant Health Australia (PHA), the national coordinator of the government-industry partnership on plant biosecurity, has welcomed Sarah Corcoran as its new chief executive.

Steve McCutcheon, chair of PHA, said Corcoran was awarded the position in April following a rigorous recruitment process undertaken by the PHA Board.

“She brings a wealth of experience to the role, with over 20 years working in biosecurity, including leading responses to exotic pest and disease incursions,” said McCutcheon.

In her previous role as executive director, biosecurity and animal welfare; infrastructure and major projects with the Northern Territory government Corcoran was at the forefront of leading the response to the citrus canker outbreak.

Prior to that, she held a number of senior plant biosecurity positions with the Queensland government and led the largest invasive ant eradication programme ever undertaken in Australia.

In welcoming her to the company, McCutcheon said that he looked forward to working with Corcoran to continue PHA’s ongoing work in the plant biosecurity system.

“PHA’s unique role is to bring stakeholders together from government, industry and the supply chain to generate biosecurity solutions that benefit Australian producers and the environment,” McCutcheon said.

Corcoran said that she is eager to take on a broader role in the national system.

“In the past I have worked with PHA on a number of projects and responses to incursions. But there’s much more to PHA, including work in the areas of preparedness and training,” Corcoran said.

“In my role as chief executive I look forward to building on the good relationships we hold with our stakeholders and continuing to bring people together to create solutions from a national perspective.”

Corcoran will follow in the footsteps of Fraser, who was appointed to this role in 2008 and over the next 12 years, made a significant contribution to the growth of the organisation and Australia’s plant biosecurity system.