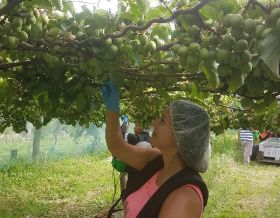 Ashley Bloomfield, director-general of health for New Zealand, has granted an exemption to horticulture workers involved in the production, processing, transport and supply of fresh produce between Pukekohe and the surrounding areas.

New Zealand, which had previously gone 100-days without an active Covid-19 case, has recently seen a spike in infections. It was initially thought the virus came via cold-storage and freight, however this has since been ruled out.

While the case numbers remain relatively low – approximately 60 cases are linked to this new outbreak – the government wasted no time in placing sections of the country into a renewed stage 3 lockdown.

Horticulture New Zealand is encouraging all essential workers entering and exiting the Auckland region to carry a copy of the gazette notice, published by Bloomfield, a letter from the Ministry of Health – which can be downloaded – as well as a movement declaration form, which is to be completed for each workplace.

Meanwhile, the New Zealand government has announced it is extending its Recognised Seasonal Employer (RSE) visas by six months, allowing workers to stay and work in New Zealand.

Immigration New Zealand said it will contact all RSE employers whose workers visas are expiring.

The extension will take effect from 18 August 2020 and will apply to all RSE workers whose visas are expiring between 18 August and 31 December 2020.

RSE workers who wish to continue to work in New Zealand for the same purpose after this additional six months will also be able to apply to stay longer.