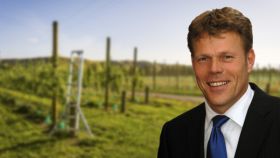 In a statement, HortNZ said van Beek had made a significant and telling contribution over the past 14 years, having joined in 2006.

“His contribution that has seen a large number of horticulture and wine employers benefit from access to Recognised Seasonal Employer (RSE) scheme workers. This in turn has enabled significant industry growth, which is in large part due to the RSE scheme and Jerf’s role within that scheme,” it read.

Van Beek was a key architect of the RSE scheme, working in conjunction with the New Zealand Labour government during its inception.

HortNZ said, “The impact of Covid-19 and the changing nature of the horticulture industry has seen Jerf’s role change. The operation of the network of Regional Labour Governance Groups and the National Group has changed. Key product groups have taken over much of the role and the way in which Immigration New Zealand is managing the RSE scheme is also changing,” it explained.

“In other words, the way seasonal labour is managed and operated is changing and will continue to change. This has affected Jerf’s role and has changed HortNZ’s role with seasonal labour. What was once needed is no longer required.”

HortNZ acknowledged van Beek’s contribution and wished him all the best for the future.