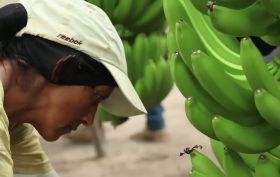 Fairtrade International has announced a comprehensive approach to supporting banana farmers in 2021 and beyond through efforts to achieve living wages and improve working conditions.

Fairtrade’s new Base Wage for banana workers will benefit thousands of workers on Fairtrade-certified banana estates and make what the organisation has called "significant strides toward a sustainable living wage".

While Fairtrade acknowledged that living wages are the most pressing challenges facing the banana sector, it is taking a holistic view by also implementing initiatives to protect the fundamental rights and freedoms of banana farmers in the workplace, including health and safety, gender equity, acceptable working hours and the right to bargain.

"Currently, workers in many producer countries are paid the national legal minimum wage; however, in most cases, this is still below a living wage," Fairtrade outlined. "Inadequate wages remain a reality for many banana workers struggling to earn enough to feed their families, enjoy safe housing, send their children to school, afford adequate healthcare and put some money aside for emergencies.

"To improve the quality of life for these hardworking farmers and workers, Fairtrade instituted a new Base Wage to ensure all Fairtrade banana workers receive 70 per cent of the take-home pay needed to achieve a living income. The wages will take full effect in all countries by July 2021."

Fairtrade said it was the first organisation to take a concrete step towards living income for banana workers, and said that it intended to continue that progress until all workers earned the complete living wage amount of US$461 per month, which is the living wage in the top three banana producing regions.

The new Fairtrade Base Wage means higher wages for thousands of banana workers on Fairtrade certified estates, and a safety net to help them meet their essential needs. Every Fairtrade banana worker will receive at least the Base Wage, regardless of legal minimum wage in their respective country, the body noted.

In addition to instituting the Fairtrade Base Wage, the organisation is also helping banana workers unite to advocate for themselves.

According to Fairtrade, collective bargaining is the most sustainable and empowering approach to reaching a living wage, both for workers and their employers in the long term.

In some growing regions, banana workers are not represented by trade unions to negotiate on their behalf for better wages and conditions, which Fairtrade said was "especially concerning" since the Covid-19 pandemic had increased the insecurity and vulnerability of millions of agricultural workers worldwide, including those working on Fairtrade certified banana estates.

To improve working conditions of all banana workers, it was described as "critical" that workers unite in free and independent organisations and negotiate their own terms of work.

“It is our mission to ensure all of our certified banana estates fairly compensate workers and empower them to come together to advocate for their rights,” said Peg Willingham, executive director at Fairtrade America. “Like many complex problems, the solution to improving the quality of life for banana workers relies on the industry as a whole putting human rights before profits.

"This requires traders, buyers, retailers and consumers supporting Fairtrade bananas in order to pull the whole sector toward a living wage for all," Willingham added.