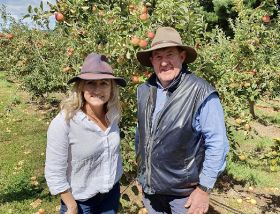 A diligent tree planting programme will see a steady and sustainable lift in production of Australian-grown Kanzi apples, both this season and in the future.

Volumes are expected to reach over 5,000 tonnes in 2021, according to Elisa King, general manager of Horticulture Brand Management Australia (HBMA), the master licensee for Kanzi in Australia.

“This year we’ve experienced our most significant lift in volume yet, with good weather conditions and large trees planted 2015 to 2017 coming into full production,” said King.

“This means we’ll have an extra 2,000 tonnes of Kanzi apples compared to last season, which will ensure availability into Spring.”

A cross between a Royal Gala and Braeburn, Kanzi was first introduced to Australia over 12 years ago.

King said the branded variety has been a hit with consumers, thanks to its unique flavour profile and appearance.

“The characteristics of a Kanzi apple have strong consumer appeal, from its unique sweet and tangy flavour, to its flesh that stays white for longer,” said King.

In a bid to grow the market, an extra 34,000 Kanzi trees will be planted in Australia this year. HBMA has carefully considered the allocation of new plantings.

“By 2024, when the trees hit full maturity, we estimate more than 10,000 tonnes of Kanzi apples will be harvested in a season,” King said.

“While there’s significant investment in orchard strategies and plantings to increase volumes, we’re careful to ensure domestic demand continues to remain in front of supply.”

In line with this vision, HBMA will scale up its marketing programme to support this year’s record crop.

“To build Kanzi brand awareness, HBMA has a strategic marketing plan to support the 2021 season including radio, out of home and transit, magazines and online, public relations, social media and in-store,” King says.

Read more about Kanzi in the upcoming Autumn edition of Produce Plus.