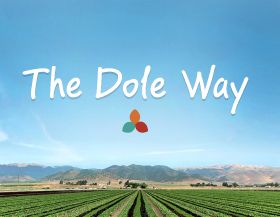 Dole Food Company has announced the launch of an integrated sustainability campaign aimed at amplifying its commitment to the key enterprise-wide sustainability goals launched in 2020 under ‘The Dole Way.’

Dole, which is set to become the world’s largest fresh produce company following its merger with Total Produce, said it believes in acting on its promise to increase sustainability, transparency, corporate responsibility and trust.

‘The Dole Way’ campaign kicked-off with a live, internal event on 25 February, led by Dole’s president and chief executive, Johan Linden. The campaign will be sustained over the next several months through integrated earned and owned social media efforts.

Designed to illustrate a path of transformation that will recognise impact and communicate goals, both on a global and local scale, the campaign is guided by Dole’s commitment to transparency, according to a company announcement.

“Dole’s longstanding legacy of responsible behaviour informs its role as a global leader in produce, and ultimately, an actor and agent of change in creating products and services that society values,” said Linden.

“Following the principles of our founder, James Dole, we have been leaders and innovators in our industry and have taken seriously the many challenges facing our business and our world.

“As has always been, our steadfast dedication towards being a responsible corporate steward of our communities will advance into our future—and Dole will continuously live up to our promise of being a good neighbour in the areas in which we grow, and a good citizen in all places where we operate," Linden concluded.