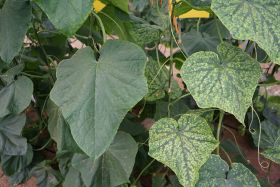 Rijk Zwaan has introduced a range of cucumbers to its line of ‘Delhi Defense’ products.

The virus has been a serious problem for cucurbit growers over the past decade, especially in the Mediterranean region.

“Although the symptoms in cucumber are relatively mild compared to other crops, the virus still causes a lot of damage and can result in lower productivity, severe patchy yellowing and moderate leaf curling in the apical leaves,” according to a release from Rijk Zwaan.

“The broad range of host plants that are susceptible to the New Delhi virus in combination with dispersal by whitefly (Bemisia tabaci) makes this virus such a threat to cucumbers.”

“Firstly, fewer infections occur in Delhi Defense cucumber varieties and secondly, if infection does occur, the symptoms and effects of the disease are limited,” the release added.

“The Delhi Defense varieties are part of Rijk Zwaan’s ‘Blueleaf’ line of varieties that have stronger natural resistances against diseases and pests. This combination offers the best of both worlds, enabling high-yielding crops as well as high-quality fruits.”

Rijk Zwaan launched a range of squash varieties under the Delhi Defense label in March.